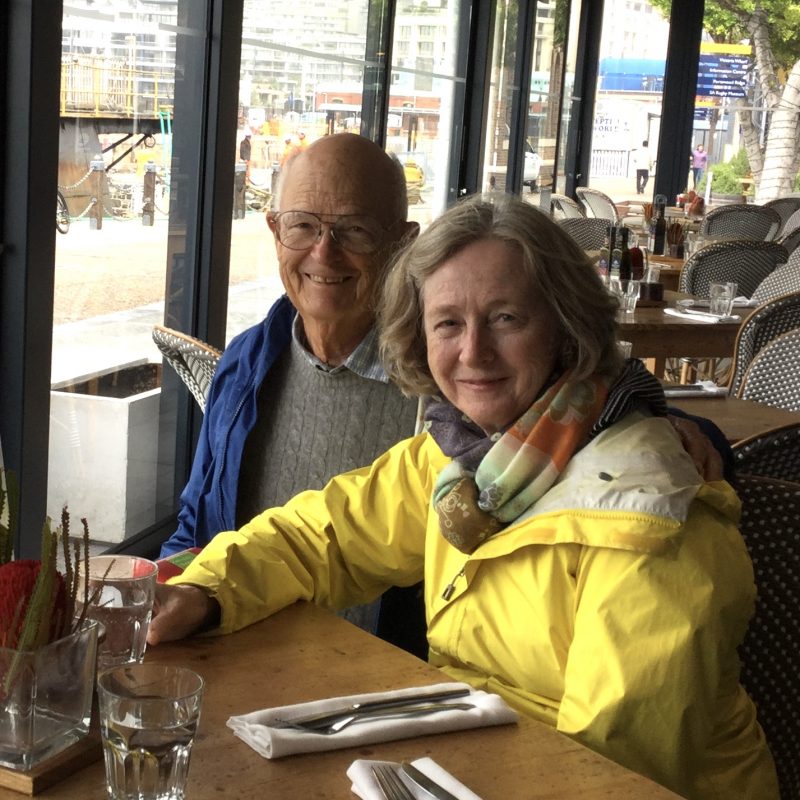 In this joint HTMC Talk Story, John and Marcia take turns answering our questions and sharing their experiences hiking and enjoying Hawaii’s natural beauty.
(and chocolate)

WHEN did you join HTMC?

JOHN: I moved to Hawaii on New Years Eve 1978, to attend graduate school at UH Manoa. I must have started hiking with HTMC a few months later. I really needed a break from studying and one day a week off to hike was perfect. Through the club I was able to meet people from outside of school too. HTMC was a real lifesaver at the time, as I knew no one in Hawaii. Marcia and I both ended up serving on the Board of Directors for some years. Over the years, friendships formed through HTMC have been long standing and strong.

When did you FIRST start hiking and WHY do you continue?

MARCIA: I started hiking in my 40s.  I haven’t stopped because I love nature and beauty. I joined in the 1980s because my husband just signed me up as a family member.  We were living in the Sultanate of Oman at the time, and I didn’t go through the approved process.  Oops!  We later fixed that loophole when we were on the Bylaws Committee.

What is your favorite hike on Oahu currently?

JOHN: I can’t really answer that, as I haven’t hiked on Oahu since 2007. That’s when Marcia and I moved to Volcano. However, when I first joined the club one of the first hikes we did was the amazing “Crazy Crab” hike – Ohikilolo. This hike goes from sea level to 3,000 ft. along one of the longest, narrowest ridges on Oahu. It blew my mind and has remained one of my two favorite Oahu hikes. (The other is Pu’u Manamana.) Sadly, the club doesn’t do Ohikilolo any more, perhaps because the Army won’t give us permission. In any case, the hike wouldn’t be the same anymore since Army Environmental installed a fence along the ridgeline to keep goats out of Makua Valley. 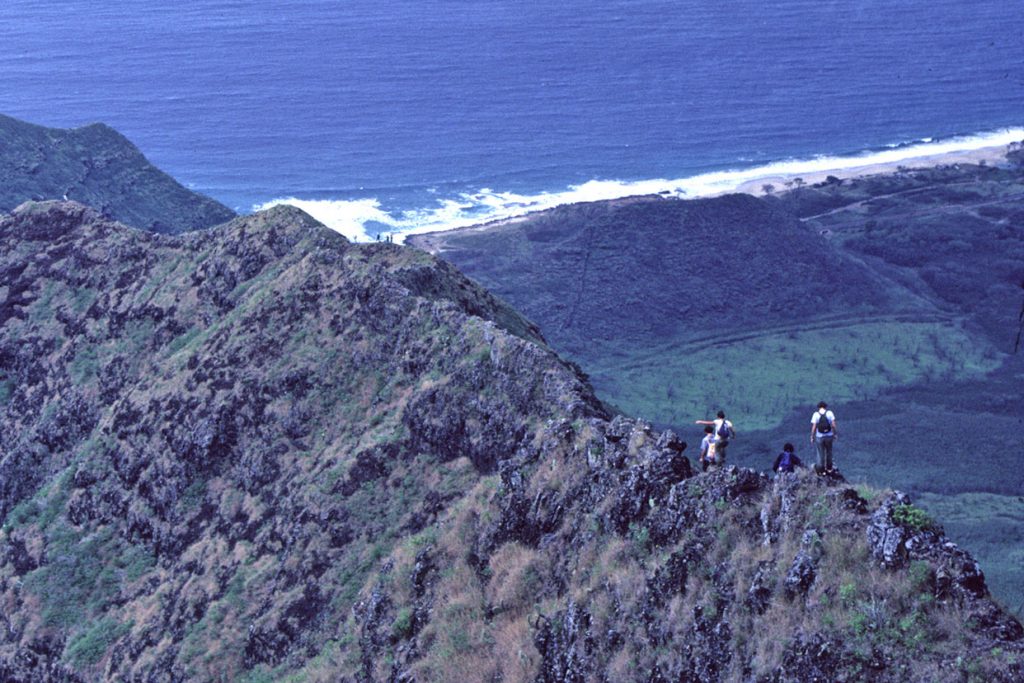 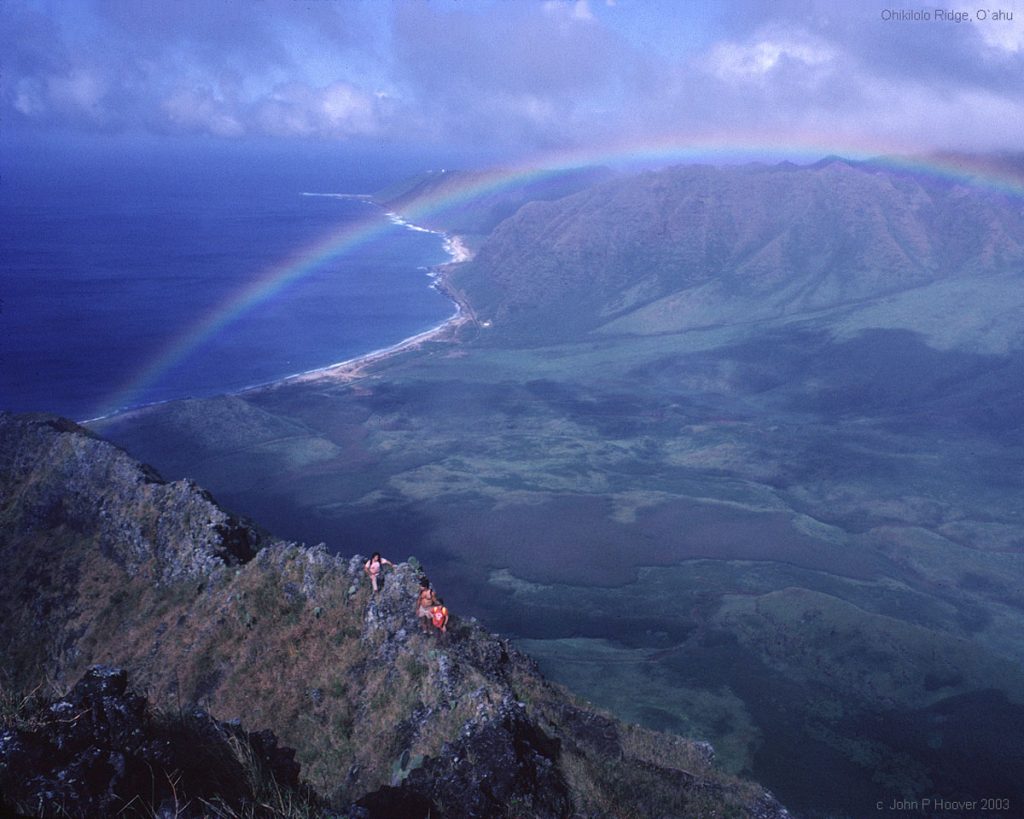 MARCIA: That would be the day I was the first to the summit ever. My usual position was near the last. On a hike in the Waianae Mountains, I unexpectedly found myself in the lead just as we were nearing the top. I could hardly believe it.  And then I heard footsteps behind me.  It was a fit young man. The path was very narrow, and hiking etiquette told me I should step aside, but I could feel glory within my reach, so I plowed ahead and when I reached the top, I felt a sense of unbelief and triumph. The fit young man told me he was late to the hike start, so I’m sure Providence had a hand in it all.

Where have you hiked OUTSIDE of hawaii?

MARCIA: John and I have hiked in the Alps and Himalayas, as well as less high grounds in England, France, Spain and Italy.  Switzerland is a favorite as the whole country is geared towards hiking.

What is your FAVORITE hiking FOOD?

JOHN: Wow, that question brings up memories. Some form of chocolate has saved the day several times. I was backpacking with a group from the Club on Kauai up in the Kokee / Waialeale area after one of the hurricanes. There were a lot of downed trees and constant climbing over or under them was wearing us all down. At one point Steve Brown was looking quite unhappy with the way things were going. Now this was when there was a Mrs Fields’ cookie store at Ala Moana. Her products were delicious, but a bit pricey for me, so before a backpack trip I would hit the store just before closing and pick up unsold cookies and brownies at a great discount. So when I saw Steve fading fast I gave him a Mrs. Fields’ chocolate brownie. He wolfed it down and the blood sugar boost revived him 100% He made it to the campsite in great form! 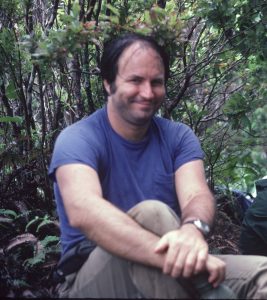 Another time that chocolate saved the day was while Marcia and I were climbing Mauna Loa to see the total eclipse in 1991 with Stuart Ball and John Hall (and about 100 other hikers from all over). On day two, after spending the night at Red Hill, Marcia and I were at about 12,000 ft. and still had a couple more hours to go, but Marcia was fading fast and didn’t think she could continue. So I pulled out a Thermarest for her to lie down on and pondered what to do. Camping here clearly wouldn’t do as Stuart and John had gone on ahead. If we didn’t turn up, they’d worry. Then inspiration hit. I remembered that I had some freeze-dried chocolate mousse in my pack. I got out the camp stove and made Marcia some hot mint tea while I mixed up the chocolate mouse. After a little nap, Marcia downed her hot tea and chocolate mousse and revived completely. In an hour or two we made it to Jaggar’s Cave where Stuart and John were holding a spot for us. 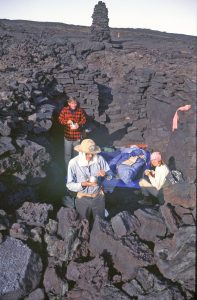 Of course, that reminds me of another incident that has nothing to do with food. The next day we all hiked to the summit (several miles away) to view the eclipse. We could see clouds below us everywhere and realized that the thousands of people who had traveled to the Big Island to see the eclipse were probably going to be disappointed. There were even clouds blanketing Mauna Kea, but the sky above Mauna Loa was clear. At the appointed time, we enjoyed great views of the eclipse, including the famous “diamond ring” effect and the corona. We then continued on around the rim of the caldera to a place where we could climb down and cross the caldera floor back to Jaggar’s Cave. However, while we were crossing the caldera floor it started to rain and John Hall looked stricken—he had left his sleeping bag lying out on the lava by the tent. It would now get soaked and he faced the prospect of a cold and uncomfortable night in below freezing temperatures at 13,000 ft. Even worse, when we got back to the campsite the sleeping bag was gone! Some thoughtless person had made off with it. Luckily, that wasn’t the case. Instead, the unknown person had thoughtfully stuffed it into John’s tent out of the rain. Whew! 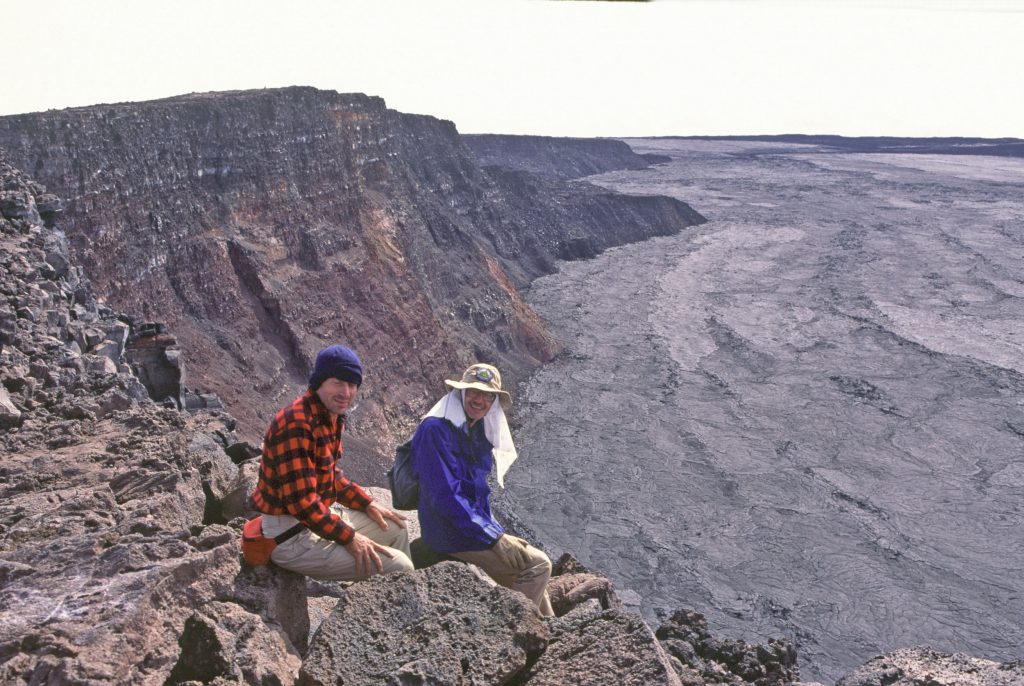 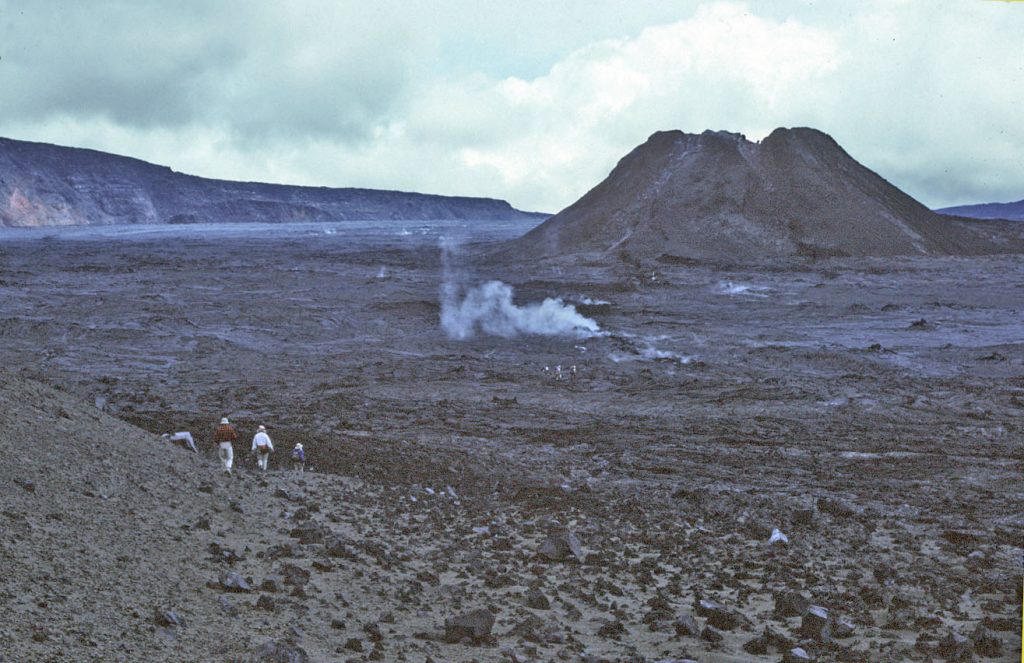 What do you BRING ALONG when you go on a hike?

MARCIA: I discovered Danner boots in Portland a few years ago.  Made in the USA and the soles are sewn on rather than glued, so they can be repaired.  They are a favorite of the national park rangers and now me.

What is your extent of INVOLVEMENT with HTMC over the years?

MARCIA: I spent several years as the accountant and so attended many board meetings.  I was also a member of a Bylaws Committee.

MARCIA: I do have a recommendation.  If an otherworldly experience combined with a physical challenge appeals to you, come to the Big Island and hike Mauna Loa from the 7,000 foot level to the summit in the National Park. It is a mountain with mana.

What INSPIRED you to write your books about Hawaiian marine life?

JOHN: I got my masters degree and found a job at Hawaii Medical Library, Queens Medical Center. But a few years later I began to get restless again and applied for a job in the Sultanate of Oman as part of a US Aid project. They wanted a librarian to start a marine sciences library in a new marine science and fisheries center in the capital city, Muscat. I got the job and moved to Muscat, Oman, in 1987 (which is where Marcia and I got married—that’s a whole other story).

On the job I had a lot of spare time because it took months and months for the books I ordered to be received. So I used to go diving with a young aquarist from Oregon, also hired by US Aid to start a public aquarium. We would collect fish for the aquarium, but we noticed that some of the fish were not in any of the books. We couldn’t ID them. I got an underwater camera and started taking fish photos and sending them to the Bishop Museum for ID. It turns out that some of them were new to science. I decided to put together a fish ID book for Oman. I took lots of photos and researched as best I could, but the project came to nothing. No one was interested in publishing it.

After 3 years Marcia and I returned to Hawaii and resumed hiking with HTMC. On one hike Stuart Ball mentioned that the Bishop Museum Press was looking for books to publish and that he was going to write an Oahu hiking book. I still had my unpublished Oman fish book in mind. Why not convert it to a Hawaii fish book? I contacted the Bishop and they were interested, so I started all over again taking fish photos and researching fish IDs. In the end, however, the Bishop Museum Press was unable to follow through. Stuart’s book was published by the UH Press and mine by Mutual Publishing, in Honolulu. Meanwhile, the Oman government contacted me and said that the Sultan wanted an Oman fish book after all. I knew I didn’t know enough to write a fish book for a Sultan, so I teamed up with Dr. John (Jack) Randall, the head ichthyologist at the Bishop Museum, and we went back to Oman twice to gather specimens and take photos for Shore Fishes of Oman, which was published in 1995. One of the fish we discovered ended up being named after Marcia! You can read all about it in this article that I wrote later and posted on my website. It’s called “Marcia and the Two-Faced Toadfish.” http://www.hawaiisfishes.com/articles/expedition_to_oman0001.pdf

[Note from the Newsletter committee: In John Hall’s Talk Story article, he cited John Hoover as the inspiration for his book A Hiker’s Guide to Trailside Plants in Hawai’i!]

I had been working as an electronics technician in the Boston area but knew that’s not what I wanted to do. I had majored in English and I liked books and computers, so I decided to become a librarian. While researching which universities had Library Science programs, the University of Hawaii stood out: not only was the price more reasonable than mainland universities, Hawaii has a nice warm climate with abundant hiking, diving, erupting volcanoes, lava tubes, even skiing!—the decision made itself.

I grew up in Massachusetts, but Hawaii is our home.  We live surrounded by a forest of almost all native plants, which is now my passion. I volunteer at the National Park nursery and am on the board of the Friends of Hakalau Forest…which leads me to…I would like to thank the club again for their interest in Hakalau Forest National Wildlife Refuge on the Big Island. And if any of you are interested in visiting the native birds and plants there, the Forest will be open to the public on October 15 for a one day event called Walk for the Wild. Top-notch botanists and ornithologists will be available along the walk to help with identifications. Register for this event by checking the website after September 1st. Aloha fellow hikers! https://support.americaswildliferefuges.org/team/443695