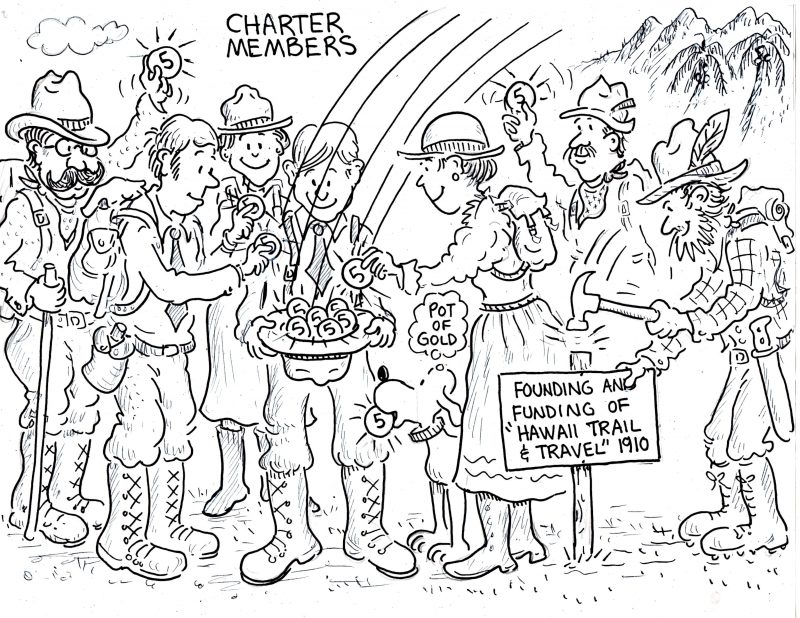 The New Out-of-Doors Club Has an Enthusiastic Start

About half a hundred prominent citizens of Hawaii attended the birth and christening of the Trail and Travel Club at the chamber of commerce yesterday afternoon. The Godfathers were C. H. Hitchcock of the Appalachian, America’s oldest mountain climbing club, and E. T. Parsons, a director and live-wire of America’s second oldest mountain club, the Sierra, the one representing the East, the other the West. The sponsors, or directors elected by the new club were W. R. Castle, Lorrin A. Thurston, Irwin Spalding, Alexander Hume Ford, Robert Shingle, J. P. Cooke, Ed. Towse, Ralph Hosmer and Rev. Doremus Scudder. These will meet at nine o’clock this morning at the office of W. R. Castle and elect a president, vice president, secretary and treasurer, and then the real work of the club will begin.

The meeting was called to order at four-thirty, Mr. Thurston in the chair. The constitution, as prepared by the committee appointed at the preliminary meeting two weeks ago, was read and adopted after a few changes had been made, the most important of which was the insertion of the Sierra club voting clause complete. This permits each member to vote by mail and he may select his own nominees to vote for. Every adult will have a vote. Boys over fifteen and under twenty-one will pay half dues, and will not vote until they are of age. Children under fifteen years of age pay one dollar a year dues. There is nothing in the constitution to bar women from membership and office in the club.

C. H. Hitchcock of the Appalachian Club made a few interesting remarks about the work of that famous organization. He told what it had accomplished through legislation in the way of preserving natural features to the nation. E. T. Parsons, director of the Sierra and member of all the western mountain climbing clubs, also addressed the meeting. He told of the work of the Sierra Club, how it took hundreds of its members on mountain outings during the summer. Some times as many as thirty invited newspaper men and magazine writers accompanied these outings, and what they wrote did California a world of good, for everyone knew that the Sierra Club had nothing to do with the promotion work and that its bulletins were absolutely statements of facts, and that they were so regarded by the state department in Washington. Mr. Parsons pointed out the use such a club could be to Hawaii. “The tourist is worth $200,000,000 annually to Switzerland,” he said, “yet a little more than a hundred years ago her Alpine heights and glaciers were absolutely unexplored and unknown. Alpine clubs have made nearly every mountain peak accessible, and today the value of the tourist trade of Switzerland is estimated at four billion dollars. The mountain clubs of California are attracting the very best class of tourists. The people may discount the statements of our promotion committees sixty percent, but they do not discount the descriptions our writers in our clubs give in the annual bulletins of their organizations.

Here in Hawaii you have a wonderful opportunity. Prepare your trails and resthouses for your own use, map out the trails and put out accurate information. The tourist will learn of it, and you won’t be able to keep him away. Let a man join your club in any part of the world, and let him vote at every election and on any change in your constitution; then you keep him. Let him vote by mail, no matter if he is in New York or in Europe-if he is a member let him vote. This is what we do in the Sierra, and it is the secret of our success. You should have one great organization for all the islands. Let each island have its own local chapter, but the dues should all come to the club. We have a southern California branch of the Sierra Club, yet only members of the club residing in southern California may join it. This is important, for when the times comes for the Sierra or the Trail and Travel Club to speak to congress in favor of some national park or kindred subject, it should be able to do so promptly and authoritatively. The Sierra Club has taken a prominent part in saving Yosemite to the Nation. There is plenty of work for a Trail and Travel Club to do in Hawaii for the good of the Islands. Once they are covered with a network of trails, we shall hear of it on the Coast, and we shall want to come to Hawaii. Switzerland owes much to her Alpine clubs; so does California to her mountain associations, and so will Hawaii to her Trail and Travel Club if it is conducted along the lines set forth in your constitution.”

Mr. Parsons is a forceful speaker and might have gone on indefinitely. The hearty applause demonstrated that fact. The meeting, now thoroughly awake, became a lively one. Ed. Towse wanted provision for junior members. He has a son four years old who is the youngest member of the Oahu Walking Club, and who tramped last Sunday four miles and the Sunday before that contributed fifty dollars to the Y. M. C. A. building fund. Provision was made for juniors, but someone else promptly jumped the life membership fee up to $100 before young Towse could get in on the ground floor. Mr. Hosmer, whose specialty is forestry, wanted to know if women might become members and no one said nay. The young Y. M. C. A. live-wire Super wanted a provision in the constitution for awards, prizes or medals for those hardy enough to clamber up Konahuanui or Kaala. The committee was instructed to oblige. It was suggested that the first one hundred signers of the constitution be enrolled as charter members, and there was a scramble to sign up. The gold pieces rattled down on the chamber of commerce table and it was all young Irwin Spalding from Spreckels bank could do to gather them in, but instinct and second nature came to his aid. Everyone wanted to be first to pay his annual dues. As there were not a hundred present, many of the friends of the movement being detained elsewhere, a motion was made requesting those who wish to come in as charter members to send their names at once to Alexander Hume Ford, Honolulu. The club treasurer will be elected this morning and will see to the collections.

After the meeting the members of the Trail and Travel club lingered in groups discussing the future of the organization and its possibilities.

(Mahalo to Mike Algiers for his wonderful interpretive drawing of this event.)