The Clubhouse Chronicles: From Boise to Waimanalo

Bio: Malia, Josh, and Mehana Collins are the newest live-in residents at the HTMC clubhouse. Malia was born and raised in Maunawili and has always talked about moving back home. She started writing a series on moving to and living at the clubhouse. This is the second installment.

The Move from Boise, Idaho to the HTMC Clubhouse in Waimanalo, Hawaii

Purge first, then pack. I started by cleaning out one cabinet or drawer each day. I hauled bags of clothes to Goodwill, gave away board games, jelly jars, kids’ sports equipment. We donated hundreds of books to Mehana’s school and stacked the rest of them in a storage closet. During my purging, I found a stack of paid Hawaiian Tel phone bills dating from June 1995-May 1998 when Josh and I were just married and I was a graduate student at UH Manoa. I tossed old Bank of Hawaii check registers and car payment receipts for our first car. A friend said purging is hard, but feels so good afterward. Lighter. Liberated. I waited, but that feeling didn’t come. I woke up some nights thinking about something I donated that I wanted back. I couldn’t toss anything that had my kids’ handwriting on it. I read somewhere it is the stories and the memories of the objects in our lives that give them weight and meaning. Once the stories are stripped away, they’re just things. But the things never became just things for me. Everything I held had a story or memory. Packing up the house was like traveling back in time to our then selves—the college and graduate school selves, the France selves, our younger selves—the people we were when the kids were born and the people the kids became.

I am a student of Zen and my fine art practice is kado, the way of the flower. On Saturday mornings, five or six of us meet for class in the back of Kalihi Valley, and Norma, our teacher, puts together a kado and describes what she’s doing so we can try one ourselves. At the end of the kado practice, we take apart our arrangements, and split the branches and flowers between us so we have flowers to practice with at home. Kado teaches me about being in the moment of an experience. By the time the flower arrangements are done, they have changed. We have changed. By taking the flowers apart, we’re giving the flowers another chance to be something else. I started to see our move to the clubhouse in a similar light. We were giving ourselves the chance to be something else.

It took three and a half months to close up our life in Boise, put all of our furniture in storage, and whittle down what we needed for the year to two suitcases each and a couple of boxes. On May 9th, the day of the move, an unseasonal and unexpected snowstorm blew through Boise, blanketing our yard in white and knocking out the power across the neighborhood. The movers showed up late wearing winter gloves and parkas. I believe in ho’ailona, or signs, and I thought the snow was a sign, that the house and the objects in our house were telling us something. When I told this to Josh, he said, it’s telling us that it’s time to move back to Hawaii. 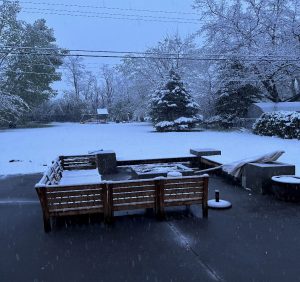 Josh moved into the clubhouse by himself on March 12th. Mehana and I finished out the school year and moved in June 1. Those two and a half months were the longest time we’d spent apart from each other and there were days when I wondered if we were doing the right thing. Josh threw himself into clubhouse projects. Mehana and I packed and packed and packed. We all made lists and kept checking things off. May 30th, the morning Mehana and I drove out of Boise on our way to Oakland to drop off the car to ship to Honolulu and fly home, we looked at each other, and at the car filled only with the things we were taking to Hawaii, and Mehana said, we did it. It wasn’t until we hit McDermitt, Nevada, three hours into our drive, when I finally felt myself exhale.

We have all been in the clubhouse almost two months and have found a rhythm to our days. I wake up early to write, Josh starts work at 5. Some days we walk down to the beach to watch the sunrise, but more than sunrise, I love the alpenglow on the Ko’olau Mountains just after sunrise. From the window, I look out on the kukui nut trees and the laua’e garden, and just beyond, a puka in the hau arbor in the shape of an eyelid. The upstairs room in the clubhouse feels like living in a treehouse and we are surrounded by bird song. The morning wind sounds different from the wind in the afternoon or at night. It has been such a dry summer, and I am grateful every time I hear the rain start. In the stillness of the afternoon heat, when it’s too hot to do anything productive, I ask if anybody wants to jump in the ocean. It is less than a block away (maybe a hundred steps from the front door to the beach), so I can usually get someone to go with me. The kids say there is no darker night than the one in Waimanalo. When it’s clear, there are stars for days. On the night of the July full moon, we walked down to the beach and waited while it slowly made its way out of the clouds. When it appeared, fat and extravagant, it so moved a group of the kids on the beach, they howled. 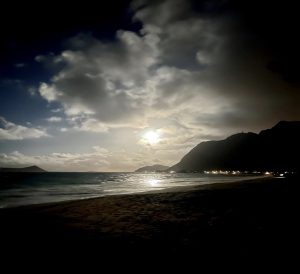 We have found small ways to bring what we love into this shared space. There is a growing collection of treasures from our beach walks: shells and parts of shells, the domed top of a blown, blue-glass ball. A few times a week I make arrangements from the tropicals in my mom’s backyard garden in Maunawili and set them in my favorite spot in the clubhouse, the upstairs corner window facing the kukui nut trees. We’ve planted ti leaves from my sister’s yard in the yard here, and a friend gave us strands of Pele’s Hair to drape over the dracaena, the money tree, at the foot of the stairs. I grew up hiking through the valleys behind our house in Maunawili, and my dad taught me the names of the different ferns we came across. I think of ferns now as a way to have my dad with me. The week we moved in, I bought three ferns and two of them have grown tall enough to see through the upstairs window. When their fronds move at night, from outside they look like tiny heads bobbing in the waves. 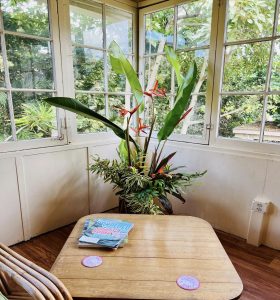 We have started to find our place in the neighborhood, too. The next-door neighbor called over to tell us the liliko’i were ripe and ready to pick. The neighbor across the street made dal over their outdoor wood stove and brought us a container for dinner. One of the club members who lives down the street texted, I left an oregano plant for you on the bench by the door.

Next month: Life at the Clubhouse

For twenty nights between the middle of August through the first week of September, there will be different groups of guests staying in the bunkroom….