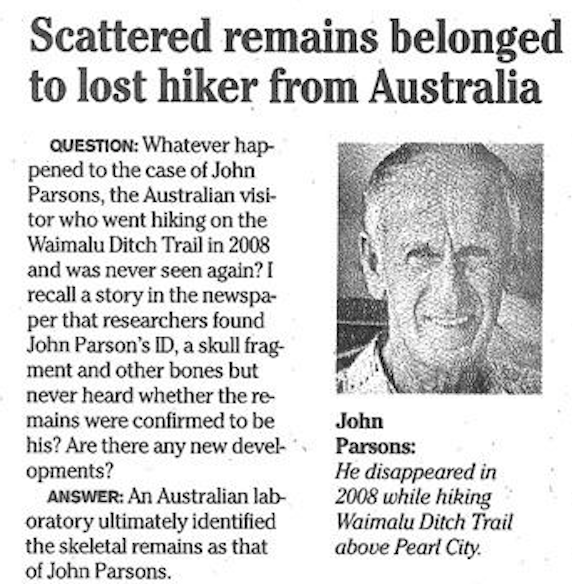 Australian John Parsons went for a short hike on the Waumalu Ditch Trail and never returned on September 4th 2008. HFD and HPD launched a search right away and HTMC joined the search party on 9/11/08. All together, I looked for him 18 days, mostly going solo, in 2008 and early 2009 but to no avail. Then on August 30, 2009 Darrell was leading the HTMC Waimalu Ditch hike and one of his hikers went missing. He notified Mabel and the Trail Maintenance Crew (we were in Haliewa). He and Will Kawano went searching for the missing man. When we arrived at Onikiniki Place trail head to help search, there was a hunter named Mickey there waiting for his lost dog. As it turned out, the dog followed Darrell and Will out. And the lost hiker was found at home…. he forgot that he drove to the hike, left his car there and caught the bus home. Anyway, Mabel found out from the hunter that on one of his hunts in the spring time, he found John Parsons ID and dentures in the stream. One of his dogs also found his femur bone. All this time I was doing searches makai of burnt ridge which is before the stream crossings. So on September 19, 2009 I did a solo search following the stream starting at crossing #1 and hours later I found his skull way past crossing #9. I called Mabel and she contacted Detective Phil Cameron of the Missing Person squad and we turned over the skull to him. There is a memorial for hunter Mickey Cottrell on the Trail. ty

Mahalo to HTMC member Thomas Yoza for sharing the above story and the images below before the upcoming Waimalu Ditch hike on Sunday November 28th, which will be led by Darrell Teruya (the same Darrell in the story above). 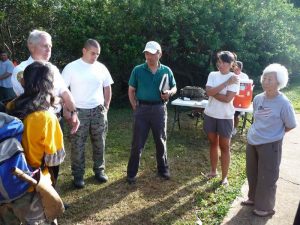 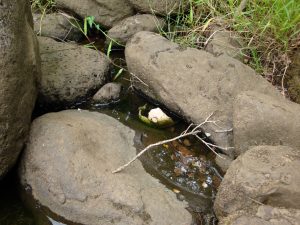 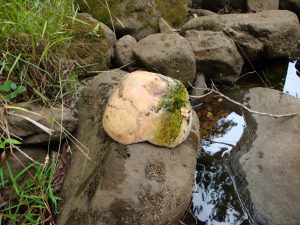 Newspaper clipping from the Honolulu Advertiser “What ever happened to” article by Leila Fujimori published on February 2, 2012 below.