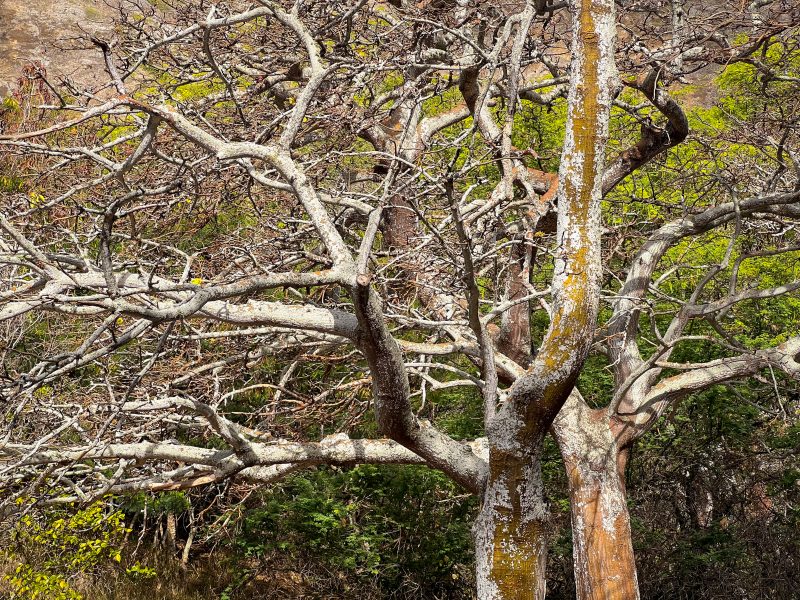 The Wiliwili is an endemic species: plants that are only found in a specific region

Range: Dry forest on all the main Hawaiian islands

Deciduous tree: The wiliwili sheds its three part leaves during the hot summer to hibernate in the dry season and preserve its water reserves.

Flowers: Its flowers have distinctive clusters of claw shaped yellow, orange, salmon, pastel green, or white flowers. Typically it will bloom after its leaves appear in the fall, but it can bloom from the summer through November. 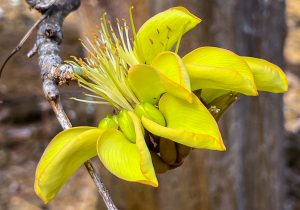 Seeds: The meaning of Wiliwili “repeatedly twisted” refers to the seed pods that twist open to reveal between 1-3 bright cherry red or yellow-orange seeds. The endemic wiliwili seeds sink in water. 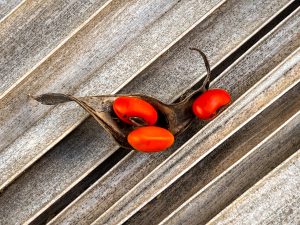 Trunks: The wiliwili can grow from 15 feet up to 50 feet. The young trees develop gray-black spines. Mature trees lose their spines, but develop an orange cast caused by terrestrial algae. 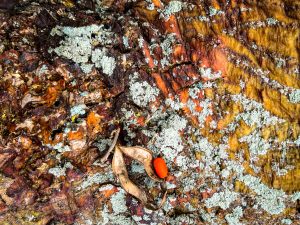 Traditional uses: Because the wood is light weight and buoyant, wiliwili wood was used for surfboards for the ali’i, canoe ama, floats on fishing nets. The ash from the burnt wood was used as a dye. The flowers were brewed for medicinal purposes to treat venereal disease. The red seeds were used in flower leis.

Hawaiian Legend: Pua ka wiliwili nanahu ka mano; pua ka wahine u‘i nanahu ke kanawai. (When the wiliwili tree blooms, the sharks bite; when a pretty woman blossoms, the law bites.) (Taken from ‘Oleleo No‘eau Hawaiian Proverbs & Poetical Sayings by Mary Kawena Pukui, 1983.) The Native Hawaiian believed that when the wiliwili was blooming, the sharks would bite, so you should stay out of the ocean. Scientists note that this makes sense because when the wiliwili usually blooms in the fall, the sharks swim closer to the land to propagate.

Hawaiian Legend: Four sisters once lived in Ka‘u on the Big Island. The first, Moholani, was very beautiful. However, the second sister was bald, the third was humpbacked, and the fourth had ragged wind-tossed hair. Moholani married and had a son who was given to the gods to raise. One day Moholani’s husband was lured out to sea by sirens. Frantically, Moholani asked her sisters to help her find her husband. But they refused, calling him worthless. This aroused the wrath of Moholani’s son who sent lighting to transform the sisters into trees. The bald sister became a tree with few leaves, the humpbacked sister a tree with gnarled branches, and the sister with wind-tossed hair a tree with leaves that flutter in the wind. Chastened, Moholani’s husband returned, never to stray again. And, according to legend, this is how the wiliwili came to be. (Taken from Majesty The Exceptional Trees of Hawaii, 1982.)

Threatened: The wiliwili was threatened by an invasive Erythrina gall wasp accidentally introduced from Tanzania, which lays its eggs in the leaves and pods. Since then, the DOA found a gall wasp assassin, another tiny wasp from Africa, Eurytoma erythrinae, that kills the larvae of the Erythrina gall wasp. Since then the results have been dramatic. Wiliwili trees throughout the State have rebounded although they still face challenges from a number of pests.

John Hall, A Hiker’s Guide to Trailside Plants in Hawaii, 2008

Article written with assistance from John B. Hall.

The Wiliwili flower is featured on the banner of the August 1, 2022 HTMC newsletter.